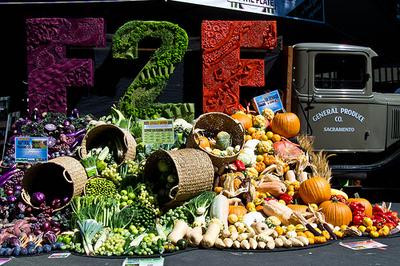 Farm to Fork isn’t a passing fad or a marketing slogan in the Sacramento region – it’s the way we live. The region has been an agricultural powerhouse for centuries, boasting a year-round growing season, ideal climate and a mouth-watering bounty of crops. Chances are, if you’re enjoying a meal in the Sacramento region, it came from a local farm.

But while Sacramento was farm to fork long before the concept had a name, it took a team of culinary and agricultural leaders to bring the region’s Farm-to-Fork Program to life. In 2012, Josh Nelson of the Selland Family Restaurants approached the Sacramento Convention & Visitors Bureau with the idea that the region should shine a light on its amazing food and agriculture and share it with the rest of the country. Soon after, Sacramento Mayor Kevin Johnson declared the region America’s Farm-to-Fork Capital, and the rest is history.

One of the best times to join in the Sacramento region’s farm-to-fork fun is during the annual Farm-to-Fork Celebration each September. For an entire month, fresh food takes center stage with farm tours, street festivals, special dinners and other events happening almost every day. The SCVB hosts several hallmark events throughout the Celebration, designed to showcase where our food and drinks come from. These festivities include: 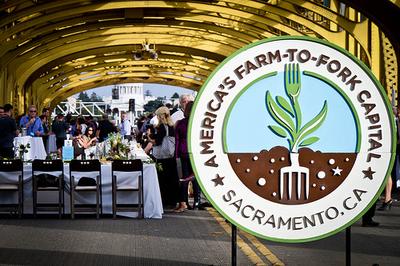 The Farm-Fresh Food Drive (Sept. 7) – The Farm-to-Fork Program will once again team up with the Sacramento Food Bank & Family Services to host a fresh produce food drive at the Food Bank’s cold storage facility to officially kick off the 2016 Celebration; last year’s drive became 142,000 meals that fed 16,000 people for three days. The organizations will work with area farms and grocers to gather fresh, local produce to then be distributed to regional food bank clients. Members of the community are also invited to donate from their own home gardens and orchards. After raising a Guinness World Record-setting 170,923 lbs. in 2015, Farm to Fork will aim to beat the record, and Guinness will again be on-hand to adjudicate.

Farm-to-Fork Legends of Wine Presented by Cadillac (Sept. 16) – The season’s premier wine tasting evening will return to the State Capitol. National wine experts Darrell Corti and David Berkley will select wineries from across the region to pour on the Capitol’s West Steps, alongside area eateries like Hook & Ladder serving delicious bites. Tickets are on sale now at www.farmtofork.com/events/legends-of-wine.

Farm Tank (Sept. 22-23) – The SCVB has partnered with leading food non-profit Food Tank to bring a new, West Coast version of its popular East Coast conference series to Sacramento this September. The annual “Farm Tank” Conference will be a first-of-its kind event that features more than 70 food and agriculture experts from across the country and the Sacramento region. In addition to speakers’ panels, Farm Tank will include a day of hands-on learning excursions to regional farms, distribution centers, restaurants and other related sites to highlight the greater Sacramento area’s key role in the country’s food system. Tickets are available at www.eventbrite.com.

Farm-to-Fork Festival (Sept. 24) – The country’s most-anticipated fresh-food party will be back on Sacramento’s Capitol Mall, bigger and better than ever. Attendees will find more than a half mile of booths from area farms, ranches, restaurants and more, along with beer and wine gardens, chef demo stages and kids’ activities. National celebrity chef Rick Moonen will be among the culinary experts to hit the live demo stages, and musical acts will also perform throughout the afternoon. The event remains admission free, with proceeds from Tower Bridge Dinner ticket sales going directly to fund the expanded Festival.

Farm-to-Fork Gala (Sept. 25) – The month-long Celebration will conclude on Sacramento’s iconic Tower Bridge when close to 800 diners enjoy a one-of-a-kind culinary experience created by the region’s top farmers and chefs. In its fourth year, this fundraising dinner will focus on the unique collaborative nature between the region’s farmers and chefs, with teams working together to create a five-course meal. Details on the lead culinary team and can be found at farmtofork.com.